... is not about you but your listening!

This weekend is gonna be a great opportunity to tune with the amazing frequency of this historical moment. It is a difficult moment and simultaneously it is open to a lot of new possibilities and so I propose to ask and inquire the question:

What is to be original? What is to express originally something?

AND be aware of how much of imitation and homologation is in your expression.

Being original is not about any idea and more importantly it is not about you but rather about your listening. Usually our listening is totally mechanical and conformed to what we know and to what we believe is true. Usually is conformed to our culture beliefs and as you can imagine in this case, expression can only be a cliche.  Being Original implies the ‘being” that by itself means relationships, implies interactions and mutuality.

We’ll walk through exercises and short scenes and with the help of a video camera we’ll watch our exploration, to get clear about how much of our expression is determined by conformed habits in behaviour. We’ll walk as group towards the awareness about what is original and what is  authentic expression.

I was online and by chance (and maybe not) I got to watch an interview with Kirk Douglass who passed away few months ago at the age of 104 years old. They asked him about Marlon Brando, who is one of my heroes. Kirk Douglas told, that he was proposed to play 'Stanley' in the theatre play “Streetcar named Desire” written by T. Williams.  Marlon Marlon got the role.

When Kirk Douglass went to see the play at the beginning he was annoyed by Brando ’s acting and then surprisingly later during the play, he was electrified by Marlon Brando’s presence on stage. Then the interviewer was talking about Brando being a great inspiration for a new way acting in the world and Kirk said something that maybe years ago I would have not accepted and that now, it seems to be the great truth. Here is, what Kirk Douglass said:

„I think he inspired very few actors who got the point of being original and free in expression but a lot of people still today, didn’t get the point and they still imitate a kind of acting and learn a technique to be like him or something similar."

These few days together will be about “being original” this is urgent to face before talking and exploring about “expression”.  To be original is not something that can be taught.

...is not about you but your listening!

(for participants of Session I &II )

" There is a possibility, that by doing nothing, you notice something,

that has always been present and yet you have never seen. " 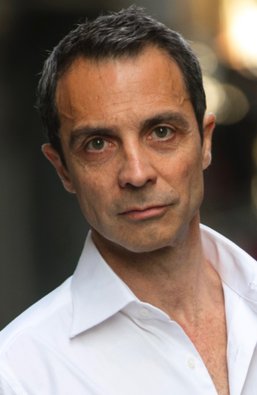 Pasquale Esposito was born in Italy, he started to travel at an early age and after spending some years in L.A. at the moment he is living in the north of Germany, Hamburg. With his wife and twins. Pasquale is a professional actor working in both theatre and in the film industry in Italy.

He has been practicing Zen (Soto) Buddhism since 1993 and was officially ordained in 2001 at the Fudenji Zen Temple in Italy. He studied acting with Susan Batson, Sandra and Greta Seacat (in New York) with Francesca De Sapio in Rome. With Dominique De Fazio (actor Studio’s member) he studied and collaborated for many years. After he completed the De Fazio System training he taught at the Studio De Fazio in Rome, Germany and Los Angeles for 4 years.

He founded the ”Research Company art and awareness” with which he propose artistic projects and his reasearch. He direct with his Company the Theatre Project “A looking Glass” in Munich. A very important part of his education comes from the “Gurdjieff’s teaching” which he followed in Rome, Los Angeles and London. Pasquale is been part of the main cast of the International Tv Show Gomorrah and he won an award for his role played in the Tv series. Gomorrah has been distributed in 190 countries including UK, Germany, Spain, USA and others Country. Pasquale is teaching at the Drama, Theatre and performance department of University of Huddersfield in Manchester in UK. He loves to keep training as boxing as amateur to keep himself awake.

Starting with the scholar year 2019/20 Pasquale Esposito's teaching has a home base in Germany at actíng and arts. In a series of weekend-encounters, we will shift from the usual paradigma to train your body skills in order to be espressive, into being aware of the inevitable, unstoppable expression of your experience through the body, so to stop worry about doing and be interested about what’s moving through.

Each session is in itself a possibility for a concrete understanding of the principles about the creative process from a Zen, Mindfulness view point. So each session can be booked singularly and yet there is a journey structured, if you follow all three sessions.

The proposal of all encounters regards a conscious action into the unconscious. Like consciously jumping into the emptiness and let the unconscious processing the landing. There is an unbalancing process between conscious and unconscious, controlling and out of control, stillness and movement and the awareness of which allows the expression to be unpredictable and spontaneous. The action that holds life is an unconscious action, that is inevitable and surprising. Pasquale’s work doesn’t want to be a new approach that can be a substitution to a different one, but rather it is a physical self inquire on what is true, what is real in terms of experience. What is a real experience?